So Happy Together Again

So Happy Together Again 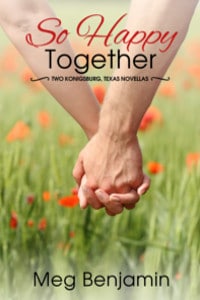 Every author knows the experience: a character who’s supposed to be a supporting player suddenly starts moving toward center stage. Sometimes you nudge her back to the edges. But sometimes you think, hmmm, maybe there’s something there.

That’s the case with several of the characters in the two Konigsburg novellas that make up So Happy Together, my new Konigsburg book, released on August 10. These characters have appeared in other Konigsburg books, and they really deserve to have their own stories.

Chico Burnside and Andy Wells of Shelter From the Storm have already had an entire book, or anyway half of one. Chico and Andy are one of two pairs of heroes/heroines in Hungry Heart. But both of them had supporting roles before that. Andy brought the Texas Department of Environmental Quality to Morgan Barrett’s winery in Long Time Gone, and she saved the day. Chico first showed up as a name mentioned in passing in Long Time Gone. He appeared as a full-fledged character for the first time in Brand New Me, where he was originally going to be one of the eccentrics at the Faro. But the more I wrote about him, the more he intrigued me, and he started showing up in other books, too. He was in the background at the Faro in Don’t Forget Me, and he was the talent booker who talked to MG Carmody in Fearless Love. By then I knew I wanted to feature him in a book of his own. Thus, Hungry Heart.

But at the end of Hungry Heart, I still felt like I had more to tell about Chico and Andy. I really wanted to talk about their wedding, but after Wedding Bell Blues, I didn’t want to do another formal ceremony. Then it struck me: Chico and Andy were definitely not the formal wedding type. How to get around that? You’ll see how that works out in Shelter From the Storm.

Of course, other Konigsburg characters also show up with Chico and Andy: Clemencia Rodgriguez, chef extraordinaire at the Faro and Deirdre Ames’s bestie in Brand New Me; Nando Avrogado, hero of Don’t Forget Me and Konigsburg’s assistant chief of police; and the extended Burnside family, who show up en masse in Hungry Heart. It’s sort of a Konigsburg reunion.

Going Up In Flames is a little different, in that it doesn’t take place in Konigsburg itself. It was originally published as part of a Kindle World associated with Erin Nicholas’s Sapphire Falls series, so the story is set in Sapphire Falls, Nebraska. But I got to bring some Konigsburg characters along as well as creating a few new faces like the Engstroms and Chip Fletcher, Jenny Engstrom’s lovelorn swain. The hero here, however, is pure Konigsburg. Jorge Delgado first appeared in Fearless Love as one of MG’s kitchen nemeses. He showed up again, still in the kitchen, in Hungry Heart. I’ve always had him sort of in reserve, a brooding presence working the flattop. Going Up In Flames not only gave me the chance to use Jorge, but I got to bring back the other hero/heroine pair from Hungry Heart: Harris Temple, the Barbecue King, and Darcy Cunningham, the tough chef who also appears in Fearless Love. You may feel, as I did, the urge to go grab yourself some Texas barbecue after reading Going Up In Flames, but there are worse ways to spend your time, believe me.

So welcome back to Konigsburg, Texas, or thereabouts. I hope you’ll enjoy So Happy Together. If you’re a first timer, I hope you’ll go back and pick up some of the earlier books, starting with Venus In Blue Jeans. And I hope there’ll be more visits to come for everybody. There are lots of folks in Konigsburg, and they all deserve to have their stories told.


Want to keep up to date? Bookmark my blog or sign up for emails in the sidebar if you want to be notified when I post another installment. I’m no longer sticking to a strict schedule.

Posted in Blog, On Writing • Tags: konigsburg, romance characters, romance novels, So Happy Together, Texas |  Be The First To Reply!