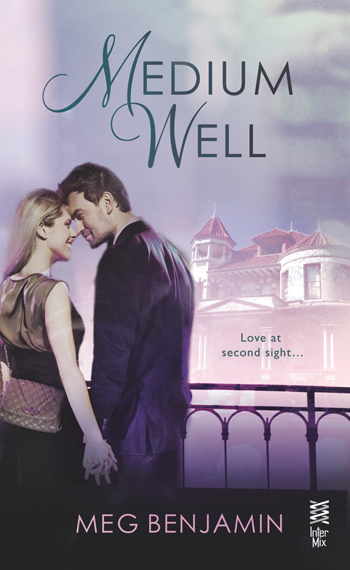 Real estate agent Danny Ramos has always had a knack for selling homes, but when his boss saddles him with a neglected carriage house, Danny discovers that his abilities are more than simple intuition…

On his first visit to the house, Danny is confronted with visions of a violent murder. His assistant, Biddy Gunter, doesn’t seem affected, and Danny starts to think he’s going crazy—until he gets a visit from his mother, who suggests that Danny’s uncanny talent to sell old houses may stem from his family’s psychic inheritance.

When Biddy reveals to Danny her own strange dream about the carriage house ghosts, they team up to investigate and discover both the house’s dark history and their own unexpected attraction. But as the hauntings turn from unsettling to downright dangerous, Danny and Biddy need to figure out how to rid the house of its ghostly inhabitants, before their budding romance meets an untimely end…

He nodded toward a door on the far wall. “Did you check in there?”

“Not yet. Maybe it’s the kitchen.”

Danny took hold of the doorknob and turned. “Locked.”

“Why would they lock the kitchen? I don’t know if we have a key. Maybe the front door key works here, too.” She started toward him.

Danny rattled the knob again. “Probably just stuck. I don’t see a keyhole.” After a moment, he put his shoulder against the door and pushed, gritting his teeth at the thought of his recently cleaned Hugo Boss jacket. The door opened with a tooth-jarring creak.

He stood in the doorway staring at another filthy room. A utility sink stood against one wall, an ancient wood-burning stove on the other. “At least it’s got plumbing. Not all these places do.”

Biddy peeped in the door over his shoulder. “Do you think the stove is worth anything? Maybe it’s an antique.”

He glanced at the stove—black metal with a steel top, covered with a half inch of filth. It looked like it weighed a ton. “Could be valuable. Assuming you could actually get it out of here. You’d have to use a crane or something.”

He walked across the dusty floor, stepping over the occasional piece of trash, then ran his fingers across the scalloped edge at the top corner of the stove.

And suddenly his hand was on fire.

Electric sparks seemed to flow up from his fingertips to his shoulder. The surface of his palm throbbed with heat, as if the stove were flaming. “What the hell?” Danny gasped, snatching his hand away.

His shoulders ached, his back, his neck. Danny grabbed hold of his burning hand and the sparks flowed to the other side of his body. “Jesus Christ!”

“Christ!” He shook both hands, trying to cool them. Slowly, the heat began to recede. “Don’t touch the stove,” he gasped. “It’s got some kind of electric charge or something.”

“The stove?” She gave him an incredulous glance, reaching her hand toward the stove top.

“Biddy, no!” Danny grabbed for her, missing her hand, so that his palm landed on the burner again.

His hand rested upon cool metal.

Biddy stared at him with real concern. “Mr. Ramos? It’s okay, really. There’s nothing here. I don’t feel anything.”

Danny took a deep breath, willing himself not to snatch his hand away again. The stove top felt cold. There were no electric sparks. “I must have touched something else. Something hot.”

“Up here?” She glanced around the room. “But it’s not hot here at all. I mean, actually it’s cold. I wish I’d brought a sweater.” She wrapped her arms around herself, rubbing her shoulders.

Danny stared around the room again. Dust. Trash. Two dirt-stained windows. He stared down at his hands, but they looked perfectly normal. No burned skin. Nothing.

His jaw clenched. Too much coffee. Too little sleep. Nothing freaky going on. “Anything else to see? Any other rooms?”

She shook her head, watching him with narrowed eyes. “Just the downstairs. The garage part.”

“Okay.” He blew out a breath. Time to head back to the real world. “Let’s go down there and check it out.”

He took the key from her fingers, feeling a quick brush of warmth as their hands touched, then shooed her out the front door, leaning back to lock it. His fingers still tingled slightly. He glanced down.

His hand was stained crimson, his fingers dripping blood.

Danny stood frozen in the doorway, staring. He didn’t feel any pain. How could he be bleeding?

“Mr. Ramos?” Biddy called to him from the bottom of the stairs. “Okay?”

He glanced down at her, then back at his hand again.