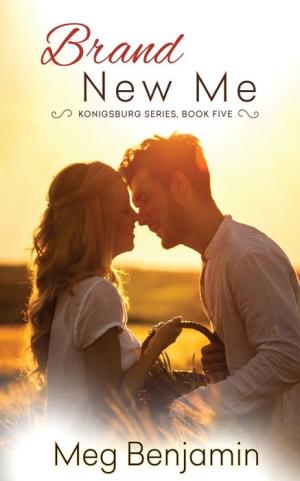 If any man wants more than a dance with her, they’ll have to get past him…

Deirdre Brandenburg has an MBA and a dream to become the coffee supplier for Konigsburg’s growing restaurant industry. What she doesn’t have is money, courtesy of her billionaire father’s scheme to make her come home. All she needs is three months until her trust fund kicks in. Until then, she needs a job.

Hiring the new girl next door is a no-brainer for ex-gambler Tom Ames. He’s already succeeded in making his bar, The Faro, a growing tourist draw. Deirdre’s beauty will pull in the locals—particularly every red-blooded male in the Hill Country. As he watches her transform from tentative business wonk to confident, sassy barmaid, he realizes he wants first crack at her heart.

When Big John Brandenburg sends Deirdre’s ex-boyfriend to drag her home, the plan backfires, leaving Tom’s bar in shambles and Deirdre kidnapped by a band of loony Texas secessionists. Things are looking pretty bleak—except the good people of Konigsburg have no intention of giving Deirdre up, either. Even if it takes every Faro employee, every last Toleffson, and one cranky iguana to give the honky-tonk lovebirds a chance at forever.

Tom took a desultory swipe at the bar with his rag. It was clean, or as clean as he could get it without stripping it down to bare wood and starting over. He watched Bobby Sue take orders from the customers sprinkled around the lunch tables. Food service wasn’t exactly their biggest source of revenue, but people liked Clem’s burgers and enchiladas, and she was beginning to branch out into more interesting things, some soups and salads. They weren’t making a lot of money off food yet, but the customer base was building.

Even with the widely spaced lunch tables, Bobby Sue was having trouble getting around. Tom figured her arthritis was acting up again. At her age she should probably be sitting with her feet up, knitting an afghan or something. Instead, here she was limping from table to table, writing orders on her green pad. Part of the reason she still worked the lunch crowd was her own aversion to what she called “idleness”. The rest of it was most likely Bobby Sue’s boy, Leon, who had a fondness for get-rich-quick schemes that quickly turned into get-poor-quick.

Leon himself pushed open the kitchen door and headed toward the bar with a tray of glasses from the dishwasher. Tom had taken him on originally as a favor to Bobby Sue, but Leon wasn’t all that bad. He could load the dishwasher at least, and sweep up. Besides, Tom sort of liked having people around who had a stake in the place, which Leon did, thanks to his mother.

Chico lounged in the doorway to the beer garden. They didn’t need a bouncer with the lunch crowd, but he liked to carry the trays for Bobby Sue. And Tom got a kick out of seeing the tourists’ reaction when he did.

Tom stopped wiping. He wasn’t sure he’d really heard anyone say anything, what with the jukebox blaring Reckless Kelly in the corner.

“Excuse me?” The voice was louder, but still faint.

He turned toward the other end of the bar, toward the most beautiful woman he’d ever seen.

Tall. Maybe five-ten or so. Hair the color of a moonless night, falling straight to her shoulders. Skin the pure white of marble, so that her faintly curving eyebrows stood out against it like parentheses. Full lips, dark pink.

And blue eyes. Sky blue. With a dark circle around the outer edge of the iris and lashes like dark smudges against her cheeks. He’d be willing to bet she wasn’t wearing makeup. Everything was natural. If she ever put on mascara, she’d probably have to carry a stick to beat off the male population of Konigsburg.

Of course, now that he got a closer look, he realized she was dressed in some of the worst clothes he’d ever seen on such a glorious woman. At least he assumed she was glorious. Given the bagginess of her jeans and T-shirt it was hard to tell. Her clothes were so nondescript she might as well have been wearing bib overalls.

“Excuse me?” she said for the third time, her voice becoming somewhat sharper.

Tom had the feeling she’d go on saying it, maybe getting a little more pissed, until he pulled himself together enough to answer her. He took a deep breath, dragging his scattered wits back into line. “Yes, ma’am.”

She paused, licking her lips, and Tom felt a jolt of electricity straight to his groin. If she kept that up he’d be vaulting the bar in another five minutes. “Yes?” he said encouragingly.

“Do you happen to know who owns the shop next door, the one that’s vacant?” It came out in a rush, as if she were trying to say the words before she lost her nerve.

“Yes ma’am, I do. That is, I own it.” Shit, he sounded like a shy schoolboy himself all of a sudden. The brunette had a hell of an effect.

“Oh.” She licked her lips again. “Well. I’d like to discuss leasing that shop. That is, if it’s available. Is it available?”

Tom frowned. Not only was the shop available, he’d been trying to find a renter ever since Ken Ferguson had closed his T-shirt shop and taken off for parts unknown, owing a couple of months’ rent and leaving him with a complete stock of cheesy T-shirts in his back room.

“Oh, good.” The brunette gave him a dazzling smile he felt all the way to the tips of his toes. Apparently keeping a poker face was not part of her negotiating style. “Maybe we could talk about it then.” She reached a hand across the bar. “I’m Deirdre Brandenburg.”

She glanced quickly around the room. “Is there an office where we can discuss this, Mr. Ames?”

Tom watched Bobby Sue limp toward the kitchen. His only office at the Faro was a prep table near the walk-in refrigerator. Somehow he didn’t think the brunette would be impressed, and Clem might drive them out with a meat cleaver if she was feeling feisty. He shook his head. “Sorry. I have to cover the bar.”

He caught her glancing at the empty stools. Okay, so covering the bar didn’t currently take a lot of effort. “Have a seat,” he said quickly. “Can I get you something to drink? Maybe a soda?”

Deirdre Brandenburg shook her head as she slid onto a barstool in front of him. “That’s okay, I’m fine. About the shop, what kind of rent are you asking?”

Ferguson had been paying fifteen hundred a month, when he’d paid, but Tom hadn’t had any nibbles yet at that price. And the shop had been empty now for a couple of months. They were too far up Main for a lot of tourist traffic. “A thousand a month. First and last month in advance.”

“Oh.” The brunette’s forehead furrowed slightly as she chewed on her lower lip. “What’s the square footage?”

Tom shrugged. “I don’t know off the top of my head. I could look it up. It’s a single room in front with a storage area at the back of the building. There’s access to the delivery entrance for the Faro at back too.”

“Could I get in to look at it? All I’ve been able to do so far is peek through the windows.”

Tom sighed. A more trusting man would give her the key and let her look. But trusting men didn’t usually own bars like the Faro. And if they did, they soon learned not to be so trusting. He himself had been born suspicious. “If you can wait a few minutes, I’ll take you over there.”

“Of course.” The brunette turned as he signaled across the room. He watched her eyes widen in consternation as Chico lumbered toward them.

“Chico’s the bouncer. His bark is usually worse than his bite,” he explained. “Although not always.”

Chico pulled out a barstool and sat. “What?”

“I need you to take over the bar for a few minutes while I show Ms. Brandenburg here what Ferguson’s shop looks like inside.”

Chico glanced at the brunette for the first time, narrowing his eyes slightly as he studied her. “Why?”

The brunette swallowed hard. Chico wasn’t making much effort to be charming.

“I’d like to lease the shop,” she murmured, her voice dropping again.

“What for?” Chico leaned back against the bar. “Crummy location. Lousy economy. What can you sell we don’t already have more of than we need right now?”

“Coffee,” the brunette muttered. She gave Chico a look of mixed terror and defiance.

Chico shrugged. “We got good coffee.”

Deirdre Brandenburg raised her chin. All of a sudden her eyes were flashing. “Not as good as mine,” she snapped.

Chico grinned, slowly, which was a fairly terrifying sight in itself. He always reminded Tom of a smiling rhinoceros. “Well, then, you got something somebody’s likely to buy.”